Have you ever wondered what would be easier to stop: a fly moving at 60 km/h or a truck moving at the same speed towards you? You will probably say the fly —and you are right. Nevertheless, what is the different between both objects, if they are moving at the exact same speed?

If you are thinking the difference lays in their masses, you are right once again. Actually, when physicists discuss topics like this, they refer to a quantity that combines both the mass and the velocity of a moving body: the linear momentum. In our example, the fly has a much smaller momentum than the truck due to its much smaller mass, and that is precisely why it would be a lot easier to stop it.

Momentum is a very important and useful concept in classical mechanics because it closely relates to the law of conservation of energy. It will allow you to deal with some physics exercises a lot better thanks to it being a vector that represents a preserved quantity in any isolated system of bodies. Keep reading to discover what momentum is all about!

How to calculate momentum

To calculate a body’s linear momentum, simply multiply its mass by its speed:

The momentum vector direction equals that of the object’s velocity.

What is the momentum?

Imagine you want to hang out with some friends and decide to play some pool. In this game, you are supposed to hit a cue ball, usually white, using a billiard cue in order to hit other balls placed on the table and “pocket” as many as possible. While playing, you may observe that, when you hit other balls with the cue ball, they start moving in different directions.

When you hit a ball with the cue, the energy released by the contraction and relaxation of your arm muscles is transferred to it. Here, the chemical energy inside your cells is converted into movement, or more precisely, into kinetic energy. This type of energy relates to a body’s velocity and mass, and is mathematically expressed as:

If you are not familiar with the concept of kinetic energy, take a look to our article about it. As you can see, and like any other definition of energy, kinetic energy is a scalar. This means it is solely made of a magnitude, with no specific direction. When energy flows in a specific direction, we refer to other type of physical quantities, such as the energy flux.

Since a ball’s kinetic energy does not tell us anything about its direction of movement, this concept falls short to explain many phenomena that take place on a billiard table. Let’s consider the following example: you use a white cue ball to hit a blue ball on a completely frictionless pool table. When you do so, two things can happen. 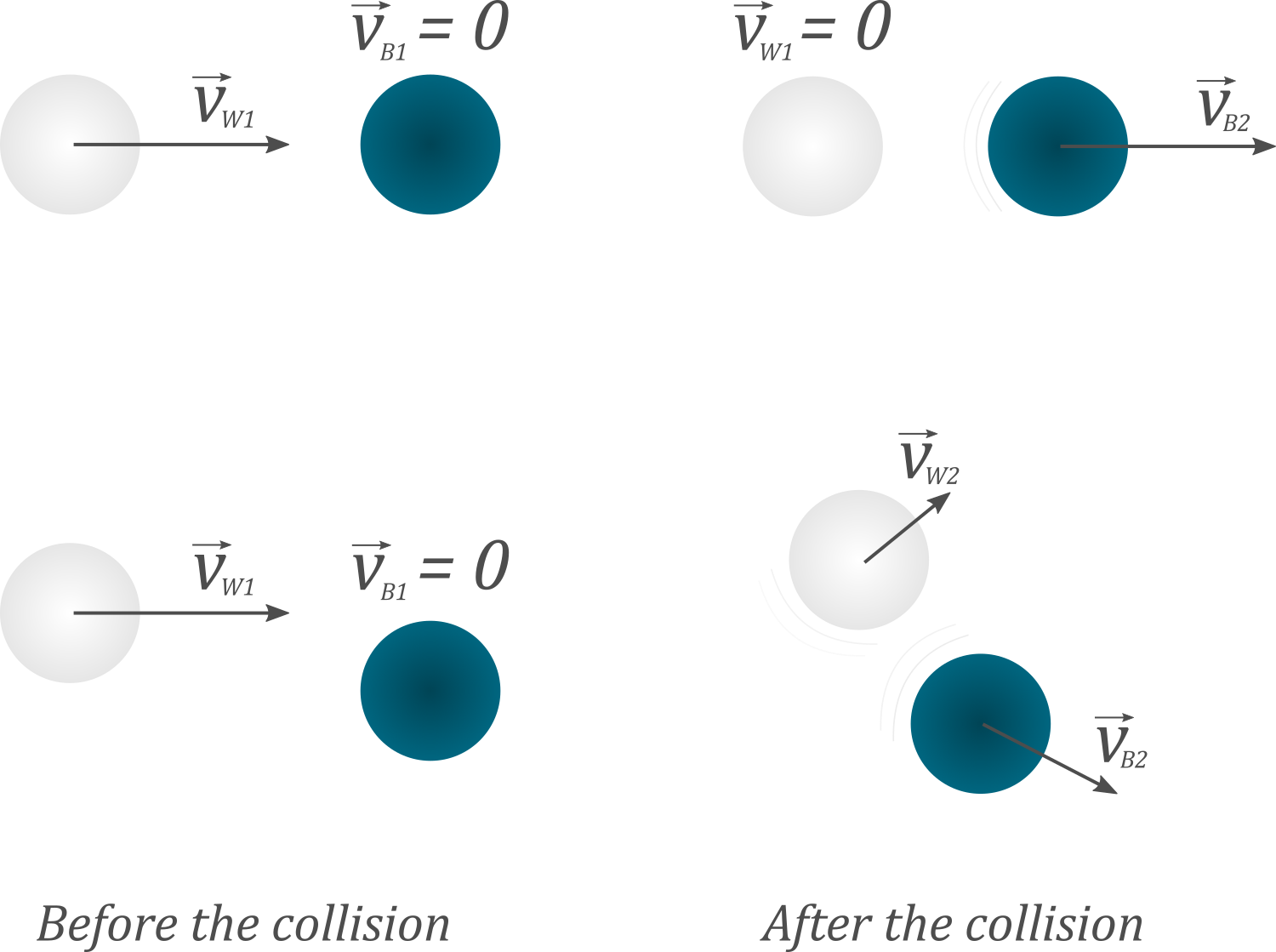 In the first scenario, since we assume no energy is lost due to friction with the billiard table or due to the collision itself, all the cue ball’s kinetic energy will be transferred to the blue ball. Since the total energy before and after the collision remains constant, we can write:

This happens because kinetic energy is a scalar and therefore sheds no light into the direction of movement of the body that contains it. In order to find a useful concept that explains our second scenario in its entirety we need to consider Newton’s second law of motion:

Here, the equation is written in vectorial form, meaning the force applied on a body will generate an acceleration in the same direction it is applied on it. Since the acceleration is defined as the derivative of velocity with respect to time, we can write the right-hand side of the equation as shown.

Since in many physical systems, and certainly in most of those you will face as a student, the mass of the body will remain constant, we can include it inside the derivative of the velocity and produce no change:

The force applied on a body is then proportional to the time derivative of a quantity equal to its mass times its velocity. Physicists call this the linear momentum of the body, and is defined as:

Keep in mind the momentum is defined as a vector, meaning it has both a magnitude and a direction. The latter is the same as that of the object’s velocity. A body’s linear momentum closely relates to its kinetic energy. Let’s use an example to see why:

Two bodies of different mass moving at the same speed will have different momenta. They will also have different kinetic energies, as both equations 6 and 2 show. If one of the bodies loses some of its energy, for example, due to friction, it will decrease its speed. This leads to a reduction in the body’s momentum, which indicates there is a parallel behavior between both quantities.

Imagine two ice skaters, Andrew and Lisa, on a frictionless surface. If both push each other away, both will start to move in opposite directions. In this example, there are only two forces present (the skaters’ weight is ignored): that of Andrew on Lisa (A-L) and that of Lisa on Andrew (L-A). In the case of Andrew, and using equation 5, we can write:

In the case of Lisa:

Now, both forces are equal in magnitude but opposite in direction. This is because, according to Newton’s third law of motion, any force has a reaction of equal magnitude and opposite direction. In this case, it means:

This result indicates that the total change of momentum in our system is zero, and therefore remains constant. Now, this is only valid as long as no external forces are applied on our system, for example, an airstream strong enough to displace our skaters on the ice. This situation is similar to our pool game example once the cue ball has been hit: if friction with the table can be ignored, any interaction between the balls is an internal one, leading to a conservation of the initial momentum.

How is linear momentum useful?

Finally, we can try and give an answer to the second scenario of our pool game example. Here, the cue ball hits the blue ball at an angle, and both end up moving in two new directions, which form angles α and β with a line parallel to the cue ball’s initial movement, respectively.

Since both final velocities occur in a bidimensional plane, we can express them through two perpendicular components, which we can call x and y. Now, given that momentum is a vector, we can write the following equation for its total x-component before the collision:

And after the collision:

Since momentum is preserved, both quantities must be equal:

Since we have defined the angles at which both balls move after the collision, we may write:

By following the same procedure with the y-component of the momentum before and after the collision, we get the following equation:

Now we have two equations (14 and 15) for two unknown variables, from which we can extract the exact solution to find both α and β. In this case, thanks to momentum, we can calculate the directions along which both balls will move after colliding, which is impossible just by calculating the initial and final kinetic energies in the system.

What is the angular momentum?

Did you notice we have always called momentum “linear momentum”? This is because it refers to a translational movement of objects. Since objects can also rotate, a different definition is needed to express the momentum a body possesses due to its rotation. This quantity is called the angular momentum and is defined as:

Where I is the body’s moment of inertia and ω its angular speed.

If you want to experiment more with collisions and grasp the implications of the linear momentum concept, go ahead and use PhET’s collision lab and broaden your knowledge!

How to calculate kinetic energy